A Runners Guide to Shin Splints

Medial Tibial Stress Syndrome (MTSS) or “shin splints” is one of the most commonly reported lower limb injuries by competitive and recreational athletes. Recent research has shown that shin splints affects approximately 20% of the running population, with the majority of sufferer’s partaking in long distance training/competition.

What causes the pain?

Currently, there is two widely accepted theories on the cause of shin splints:

The bony bending theory suggests that during running, the Tibia (shin bone) bends due to the stress placed upon it. This bending causes small amounts of strain in the bone that enables it to adapt and get stronger (a good thing!!). When this strain exceeds the adaption process the shin bone becomes overloaded (a bad thing!), subsequently leading to injury and pain.

The traction theory states that shins splints is caused by the continual contraction of the muscles (Soleus, Flexor Digitorum Longus & Tibialis Posterior) that attach to the inner border of the shin. As these muscles contract during running, they place a traction stress on the shin bone, which results in inflammation at their attachment onto the bone, causing pain.

Current research has identified several risk factors leading to an increased likelihood of developing shin splints. These include:

How do I know if I have shin splints?

To diagnose shin splints accurately, two symptoms must be present:

If you are experiencing symptoms not typical of shin splints such as cramping, pain spanning less than 5cm, burning pain, numbness or pins and needles, you should seek a thorough assessment by a physiotherapist to properly diagnose and treat your condition.

Arguably one of the biggest contributors to the development of shin splints in a runner is their running technique, particularly their lower limb mechanics. One of the quickest ways to reduce shin splints related pain is to address the technical aspects of running that can contribute to increased stress across the Tibia and associated musculature. What you should focus on is:

How do I improve my technique?

Increase your cadence!! – This is by far the biggest bang for your buck. Increasing your cadence by approximately 10%:

The best way to achieve an increase in your cadence is by using GPS watches, phone applications or by simply running on a treadmill.

Eliminate a crossover running style – On a track, run straddling a line across 2 lanes or alternatively, try and maintain a space between your knees with every stride.

Strength exercises for shin splints should aim to improve the localised muscular capacity of the calf complex as well as the bone load capacity of the Tibia. This is best addressed with weight bearing functional exercises that mimic running postures.

One of the most important and often forgotten muscles of the calf complex is the Soleus. The soleus muscle is vital for absorbing excessive loads placed on the Tibia during running by minimising excessive pronation as well as resisting the bending forces experienced by the Tibia due to ground impact.

The best Soleus exercise that runners can do is the Bent Knee calf raise (pictured above). To perform the exercise correctly:

Perform 3 sets of 15 repetitions in a slow and controlled manner.

As always, if you are having problems, please do not hesitate to contact one of our experienced physiotherapists.

Vas Krishnan is in his final year of Sports & Exercise Science at the University of Sydney.

Lets face it, injuries are annoying and expensive. They result in lost hours of training and game time as well as dollars spent on physio, doctors and imaging, and in some cases, surgery. So what are the best ways to prevent injury? We highlight the key points taken from the most recent research as well as from Leicester City’s incredible Premier League Title in 2016.

The top 3 Injury Prevention strategies are:

It was found that using an internal load and an external load measure was more effective in determining the actual load an athlete was undertaking compared to just the external load. [8]

An Example of weekly workload

Calculating Load for a soccer player could be as simple as Minutes on ground x RPE. If a soccer player trained 3 times per week and had 1 game on the weekend where the sessions went for 60min each and their game time on game day was 60min. For Training sessions RPE was 6 and game day RPE was 8.

2) Gradually increase your training. Use your load measurements to work out how much is too much.

The Acute: Chronic Workload Ratio is a way for athletes and coaches to determine the load their athletes should do for current and future training as to prevent injury. If load is considered to be km running/week. Acute load is Km over 1 week and Chronic load Km over 4 weeks. [5]

It was found that when the Acute: Chronic workload ratio was greater than 1.5 there was an increase in the risk of injury. This can be clearly seen in the graph below. [5] 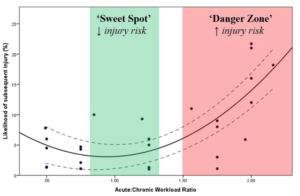 It was also found that >0.8 to <1.3 was the point of least injury risk. This was noted as the “sweet spot” and should be what all athletes are aiming to be in at all points of the season. [5]

>1.3 is where the risk of injury started to increase with a significant increase at 1.5 and an even greater increase at 2.0. [5]

Coaches and Athletes can use this as a guideline to determine the load that they should be using for transitioning season to season, coming back from injury or even coming back from holidays/time off. This can help the athlete and coach with injury prevention, re-injury and further progression. [5]

Below is a table illustrating what the likelihood of injury is for an athlete in accordance with the Acute:Chronic workload ratio. [1]

This table compares different scenarios of acute and chronic workloads using predefined equations to determine load as a percentage of normal training.[1]

The table grades each load percentage with a percent likelihood of injury. [1]

For example if an athlete has come back from a holiday and resumed normal 100% load (Acute workload) but over the past 4 weeks has only been training at 30% of their normal load (Chronic Workload) there can be an expected 61.4% increased likelihood of injury in the following week. [1]

Athletes and coaches can use this table to determine the load they should be working at or if they are at a greater risk of injury. [1]

The amount of “Load” that is too much is determined by how much you have been doing in the previous weeks.

Leicester City’s exercise scientists and coaches were meticulous about manage player loads. They used GPS tracking as one of a few tools to measure each players load.

If a player had spike in their workload, the coaches were notified and the player was pulled from the next session and sent for recovery work.

3) Be Specific in your training

This sounds so simple but we see people get it wrong all the time.

Athletes or Individuals wanting to compete in particular events must ensure they are training specific to that event. For example if you wanted to run a half marathon, you need to run! You don’t need to be in the pool swimming or doing reps on the bike.

You can start by running small distances and build your way up to 21 km. Using the Acute: Chronic Workload ratio and increasing your distance/load by 10% per week you can safely build your load and compete in the half marathon at your best.

Leicester City were specific in their injury prevention programs. They identified that the most common injury was a hamstring strain and that these occurred in the last 20mins of a game when a player is trying to sprint under fatigue. They used 2 training methods to specifically address this.

If all of this is still confusing to you (you’re probably not alone!) then at least try to stick to these simple guidelines.

If you’re still unsure, then please don’t hesitate to contact our friendly team at clinicalphysiostives.com.au

What to do when you suspect a concussion

With winter sport starting up again, it seems a perfect time to talk about concussion. Concussion seems to be the hot topic over the past few years. Sports commentators are talking about it far more than ever before. Even Hollywood has shown the impact of concussion on people’s lives.

In this article we will cover:

What do the latest guidelines say about assessment and treatment

When can a player return to sport

Concussion is a head injury caused by traumatic forces to the brain. This can happen either by a direct hit to the head or a ricochet effect from a big impact.

There are obvious and subtle signs that someone has sustained a concussion.

– Memory Loss – you can ask them some simple questions like “What venue are we at today? What half is it?

What do the latest 2021 guidelines say about concussion?

A player who has a suspected concussion must be removed from the game immediately and must not return under any circumstances.

There are a few important initial things to do with a player suffering a suspected concussion:

1) Monitor symptoms, particularly for any serious symptoms. You should call in ambulance immediately if player has any of the following signs or symptoms:

Weakness or tingling/burning in arms or legs

4) Player must not drive home, a responsible adult must drive them home.

5) You can conduct a memory test.

Within 72 hours of the initial injury, the player must be referred to an emergency department or see a medical professional who is experienced in concussion management.

Once the player has returned home, they need 24 hours of total rest from mental and physical activity. This includes minimal screen time, no school/work and no physical activity. The total minimum time for complete and relative rest (until symptoms had stopped with no medication) is 7 days for 19years and over and 14 days for 18years and under.

When can the player return to sport?

This time will vary from player to player however the minimum times are as follows:

Does headgear reduce the risk of concussion?

There is a strongly held idea that wearing headgear will reduce the risk of concussion. Significant research has been conducted in the area and unfortunately has not found that wearing headgear will reduce concussion risk. Does this mean you shouldn’t wear headgear…no! Headgear is particularly useful at reducing the risk of cut to the head, as well as the dreaded cauliflower ears.

How can physio help in concussion?

While most people will recover without problem from concussion, some players will develop post concussion syndrome (PCS). PCS can limit players from return to sport for extended periods of time.

Physiotherapy plays a key role in PCS and can help players to return to sport up 4 times quicker. Neck pain, stiffness, weakness and reduced joint position sense (JPE) all contribute to PCS and can be addressed with specific exercises and manual therapy.

If there is 1 key thing to remember with regards to concussion, it is this… “If in doubt, sit it out!”

If you have any questions regarding concussion or post concussion syndrome, please do not hesitate to get in touch with us.

Should I be stretching before the big game?

Although stretching has long been promoted as an injury prevention method, recent systematic reviews conclude that there is no evidence to support its efficacy.

The Types of Stretching

Static stretching does NOT prevent injury

The effect of stretching after exercise

With winter sport starting up again, it seems a perfect time to talk about concussion. Concussion seems to be the hot topic over the past few years: Sports commentators are talking about it far more than ever before and even Hollywood has shown the impact of concussion on people’s lives.

In this article we will cover: